Kim M. Kimselius started to write her first stories when she was a girl of eight. She wrote plays for Punch & Judy shows, short stories and a horse magazine. Then she started to dream about being an author and she also tried to write novels but she felt it wasn't yet time to show the world the results! So she put them in a drawer.

With her first book "Back to Pompeii" her dreams came true. The book was a great success when it was released in 1997 and Kim received a lot of attention from TV, radio and newspapers. She was called "The Astrid Lindgren from the county of Blekinge". Kim was proud but had mixed emotions about it: the comparison with this famous author was too high a praise that Kim felt was unearned.

“There is only one Astrid Lindgren”, Kim says. “But I wish to become as fine and admirable a person as she was.”

With the sequel ”I am not a witch” Kim repeats the success of the first one. The attention in the medias resulted in many lectures around the country in schools, libraries etc. More books have followed, all equally popular.

Kim's historical books are in the form of time travel. The leading characters are a boy, Theo, and a girl, Ramona. They live in the 21 st century but travel in time exciting places of the past. The books are filled with historical facts but Kim's way of writing and their flowing language make them easy and enjoyable to read. The books are often used by history teachers as a teaching aid.

The books are now also available in Braille.

“I want inspire children to explore the exciting world of reading and writing”, Kim says. And she has certainly done so. Children love her books and they are always “on loan” from libraries.

The number of folders standing in line on Kim's bookshelves filled with letters and stories from children bear evidence of Kim's much appreciated work in schools.

Kim's lectures are about volcanic eruptions, the pursuit of witches, mummies and graves, Inca indians and the age of the Vikings.

Sometimes she reads a chapter from one of her books aloud. Kim stops reading when the suspense is at its peak - then the children become authors: they get to finish the chapter! But before they start, Kim gives them useful writing advice.

Perhaps you now think that Kim's books are only for children or teenagers?

Oh, no! The adult readers are almost as many as the children. Asking Kim why it is so, she replies: ”Probably because I write for myself. I am considered an adult, but I have kept the child within me and never really grown up. I remember what it is like being a child, the excitement of being alive, all the secrets waiting for you. I will never become a proper grown-up.”

In the heart of Blekinge

Kim M. Kimselius was born on the Swedish west coast in the city of Gothenburg 1954. She lived there for 25 years until she moved to Vallentuna, north of Stockholm. After 16 years she and her husband Jan moved to Blekinge, a county in the south of Sweden. There they live with their Bernese Mountain dogs and cats, on a small charming farm by a tiny lake.

Kim's work with inspiring young people to read and write resulted in an award on New Years Eve 1999. It was the cultural prize of the community of Ronneby. The motivation read:

"Kim M. Kimselius is awarded the cultural prize of the Ronneby community 1999, because of her deed as an author in inspiring young people to read and write their own stories. In her historical novels she translates the historical reality to the one of our present day – without history we don't have any future. By meeting children and teenagers and using the spoken and written word she is performing an important cultural deed."

There are still a lot of manuscripts hidden in Kim's drawers:detective stories, ghost stories, travel books and fantasy tales. Let's hope they turn up in our shops one day, so we can all share them. 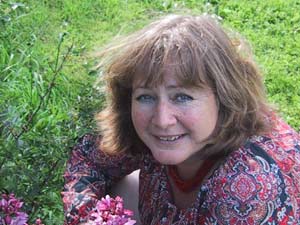 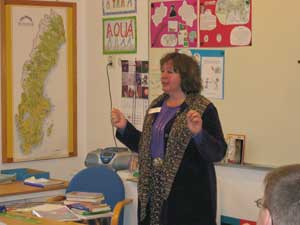 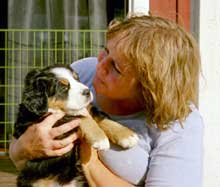 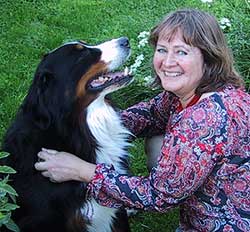