The first volume of this brand new series by Kim M. Kimselius is about Kimberlie's and Andy's adventures in New Zealand.

This exciting book will keep you spellbound from start to finish.

Text on the back cover of Kimberlie - Adventures in New Zealand:

When Kimberlie travels to New Zeland for the first time things do not turn out the way she had expected. Instead of attending dull family gatherings she is thrown straight into a series of terrifying adventures as she begins to explore the new country on her own. The New Zeland landscape is not as harmless as she had previously assumed. When a strange man suddenly appears and frightens her, she beings to realize that she has ended up in something very scary and that there is no way out.

New Zealand, its mystical landscape and evocative past are described in this thrilling adventure story that takes your breath away.

If you love Kim M. Kimselius books about Theo and Ramona, you will take Kimberlie and Andy to your heart and simply devour the first book of the series.

What the reviewers had to say about Kimberlie - Adventures in New Zealand:

"An exciting, accessible historical read for anyone who is eager to learn..."

"An accessible historical fiction story set at a rapid pace."

Her legs wanted to run faster and faster after the long journey, and she soon ran as fast as she could through deep sand and water. Suddenly, she tripped on a stone and fell straight on her face into the sea. A large wave washed over her. She spat out the water that had entered her mouth. The wave receded and Kimberlie sat up. She didn't know wheather it was tears or water that was running down her cheeks, but one thing was certain, her foot hurt terribly. Before she managed to get up, another wave washed over her. She quickly held her breath to avoid swallowing more water.

She had managed to run a long way out. When she stood up, the water reached up to her thighs. She looked down at her soaking wet clothes and laughed. What would Mum say? They hadn't brought very much to wear since they wanted to pack as little as possible into the Campavan...

Another wave hit her. It was lucky she didn't have more clothes on! There would be less to dry. She watched the next approaching wave with anticipation. "Well, I'm already wet," she thought to herself and threw herself into the powerful swell. It was strong, and brought her closer to the beach. She got up quickly and rushed out to meet the next wave. Again, it brought her a few paces back, but not quite as far as last time. She rushed out one more time. Now the water reached up to her waist.

Kimberlie bobbed up and down in the surf. Now nearer to the beach, now further out, depending on how big the waves were. Life was great!

Then she noticed something that was coming towards her in the water. She put her feet on the bottom and gasped when she realised that the water came up to her shoulders. How had she ended up this far out? She turned her head and saw the beach in the far distance. Then she turned towards the thing, which was approaching fast. She had never seen one before in real life, but she realized it was... the fin of a shark!

Kimberlie went rigid with fear. She was no longer near the beach where she could have run to safety. It was deep out here! What had possessed her to venture out into the water, all alone, without first finding out i there were sharks? She watched, terrified, as it came closer. Then she burst into action. She threw herself in the water and swam towards land as fast as she could. When she turned her head, she saw the shark's fin cutting through the water right behind her.

Andy woke up early. This was his final day on South Island. Tonight or tomorrow they would be taking the ferry back to North Island and then fly back home to Dunedin. He had spent several eventful and exciting weeks here. He didn't want to go back home, back to school or to his friends at all. He wondered where Kimberlie was. He had been impressed over how well she could speak English, almost lika a born and bred New Zealander. It was a pity that he would never see her again. For the Swedish family, the holiday had only just begun; his was nearly at an end.

He listlessly drew the curtain and looked out of the window. What's this?... 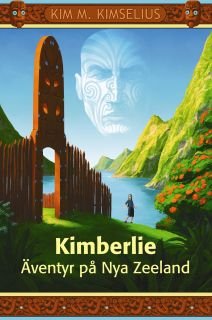