I am not a witch

Book 2 in the Theo and Ramona series

Text on the back cover of I am not a witch:

"No! Not again!" Ramona cried, terrified.

Theo knew exactly what had made her scream: Another time travel! Where were they going this time?

In the next moment they stand face to face with a bonfire on top of which a poor girl is tied. Without hesitation they raise a ladder against the pile of wood just starting to burn. Quickly Ramona climbs up and loosens the girl's ties.

The people around them seem petrified, not sure of what is going on. But when Theo, Ramona and the girl start running away a real wild witch-hunt begins. They have traveled in time to the dreadful past when innocent women were regarded as witches and being persecuted. Soon they are all accused of being witches and the same destiny awaits them as the girl they had rescued earlier.

"At last! The much longed-for revised second book in the series about Theo and Ramona. The book has gone through a big revision and is now even more exiting than the first edition."

What the reviewers had to say about I am not a witch:

“An exiting story for the young, eager reader.”

“The speed is high and the story is exiting and appealing.”

“Time travel, historical events and a lot of magic are important elements in Kim's writing. And they have proven to be successful! The people I have talked to simply love Kim's books, they read them all and still want more. No doubt the most important incentive for a writer.”

Excerpt from I am not a witch:

Theo was very careful to be on the exact spot where Anna's feet had been, before he took his first step. His foot was fumbling in the air, he got wet when he put it down and frightened he lifted it again. He hadn't found the right spot anyway.

“Of course”, Anna said. “When I said we were going to cross the moss dry-shod, I didn't mean it literally. The stones are hidden under water, moss or tufts. Just walk in my footsteps and everything will be alright.”

Before Theo took his next step he was more alert. First he tried to find something solid to stand on with his toes. Then he put his foot down. His eyes focused on Anna, trying to memorize every step she took, at the same time concentrating on moving himself. She seemed to float over the moss. It looked so simple.

Just because she seemed so sure of herself, finding her way so easily, he was very surprised when she seemed to stumble in front of him. She gave a little cry when she fell. There was a gurgling sound when the moss closed around her.

Theo was following Anna closely and was just about to put his foot on the stone where she had slipped. Now he felt uncertain where it was. He could see her sinking slowly. She was already down to her waist. Theo understood there wasn't much time. He had to grab her hand and pull her up from the dark water.

He had to be quick but very careful, or he would end up like Anna. Then they wouldn't stand a chance. Who would save them out here in the deserted swamp? And who would save Ramona and mother Anja? The mist was rising from the water and for a second he thought he could see ghostlike creatures billowing to and fro in a rhythmic dance, waiting to welcome yet another poor victim in their wet grave.

Very slowly he stretched down to Anna trying to reach her hand. All would have been well if his balance had been better, if one of his feet hadn't been in the air. But the way he was standing now…

Theo searched desperately for foothold, but there was only water. At last he felt solid ground under his foot and he put it down with relief. Then he shared Anna's terrible fate: he slowly slipped off the stone and fell down into the water.

Now they were lost beyond any hope of rescue! 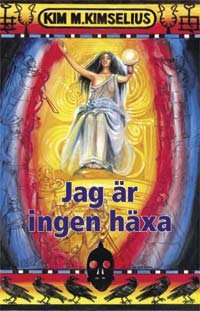