Book 4 in the Theo and Ramona series

Text on the back cover of The Hidden Inca Town:

It begins as an ordinary vacation trip to the Machu Picchu, a ruin town surrounded with myth. But suddenly Theo and Ramona find themselves in the center of a life-and-death struggle when they by a whim of fate are transported in time to the 1600 th century. It is the time of the fall of the strong Inca Empire, caused by the conquistadores who invade the land and kill the Inca people in their greedy search for gold.

Theo and Ramona get the mission to rescue the inhabitants of the town. They soon realise that they are surrounded by enemies. Evil and unnatural forces take part in the events that throw the two companions between hope and despair. Will they ever get back to their own time alive?

"With her first historical adventure book Back to Pompeii Kim M. Kimselius made an astounding debut. The hidden Inca town is another much longed-for book in this series of freestanding historical books. Kim has always shown a big interest for history and she is always trying to inspire kids to read and write. In her books Kim mixes fact with fantasy in such an ingenious and captivating way that you can't stop reading. Kim's books thrill the reader for a couple of hours and give knowledge for life."

What the reviewers had to say about The Hidden Inca Town:

”The Hidden Inca City is a tremendously captivating adventure story built around a historical event."

“The everyday language is direct and neat.... the story is told in an exiting and easy way, giving the young reader inspiration to enter the world of the story and real history all in one time.”

”As usual, Kim has made a thorough research, and the appendix with the glossary is a veritable gold mine for those who want to learn more.”

Excerpt from The Hidden Inca Town:

Ramona knew she wasn't behaving very well. She knew that this was not how she would win the Indians' friendship and respect. But she didn't care as long as she would not have to walk over that rickety, fragile thing the Indians called a BRIDGE! Not only did she hate small, narrow spaces, but on top of that she was afraid of heights. Having reached this far up passing the frightening suspension bridge earlier was an achievement, but now she was staying here, this was her limit.

“Come on! I'll go first so you can see it's quite safe. I'm afraid I can't hold your hand though, there's no room for it.”

Theo pretended to be self assured wanting to cheer Ramona up, however he was afraid he would get dizzy again from the coca leaves he had been chewing earlier for the pain. So he had probably better not hold Ramona's hand. Then at least she would be alright if he fell down. Theo looked down the precipice and the mossy tree branches. If they didn't pierce him should he fall, he would drown in the river. Theo took a deep breath, passed Ramona and then started to walk the path, very carefully step by step.

Ramona realised she had to give up her hopeless struggle unless she would be left behind and see Theo disappear in the distance with the Indians, so she followed Theo's footsteps closely with a firm grip on his tunic. If any of them happened to slip, the tunic might be their only salvation.

When they reached the beginning of the fragile bridge, Ramona nearly lost her courage again. She bit her teeth and braced herself.

“Wait! You have to walk over one by one”, Omai, who was walking behind them, shouted.

Ramona unwillingly let go of Theo and watched him stagger out above the abyss. Ramona held her breath, using all her willpower to keep Theo on the rickety bridge. It wasn't until he was safe on the other side that she took a deep breath realising she had been holding her breath the whole time.

“Now it's your turn!” Theo shouted.

Good Lord, help me through this, Ramona thought. Kind spirit of the mountain, don't be angry with me. Then she put her foot on the bridge.

When she had put both her feet on the fragile bridge, she realised with dismay that she would never make it. 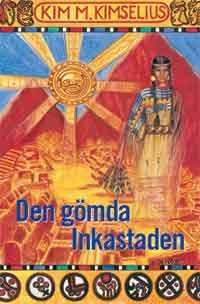