Boudica's Battle with the Romans

Book 14 in the Theo and Ramona series

Text on the back cover of Boudica's Battle with the Romans:

A historical brooch transports Theo and Ramona back in time, back to the year 61 A.D. in Britain, where they find themselves in the village of Queen Boudica. Shortly, the Romans arrive and destroy the village, on their way to eradicate the druids on the island of Anglesey.

Celtic Queen Boudica is enraged. She gathers her Celtic armies, ordering them into battle. Theo has the misfortune to be given a druid crystal, which causes him endless problems. Theo and Ramona fight for their lives, and extend their efforts to return to the present time, but fail. This journey in time, to ancient Britain seems to be a never-ending nightmare.

A new, exciting story set in the Roman Empire.

Yet another accomplished Theo and Ramona adventure.

Excerpt from Boudica's Battle with the Romans:

"What's this?" Theo had time to say in the instant before everything was suddenly different.

Theo had been leafing through second hand books Ramona bought. A thick one with an old, worn leather cover attracted his attention. It was entitled Boudica, the Celtic Warrior Queen. But he'd asked "What's this?" not because of the title of the book or its apperance, but because of something he found when he opened it.

He'd opened the book completely at random. It opened stiffly, as if it had been closed for many, many years. Lots of the pages seemed to be stuck together, but with a little effort he managed to open it to the middle.

Theo and Ramona were both astonished at what met their eyes.

This book Ramona had bought at the second hand bookshop wasn't actually a book at all. It was a hiding place! The pages in the middle had been cut away, and in the hollow that was left, there was a brooch.

Without thinking of possible consequences, Theo lifted it up. Instantly, he felt that old familiar time travel sensation: everything around him went fuzzy, and he was dizzy. A moment later he and Ramona were in a completely unfamiliar place.

Theo, Ramona and Pluto the dog were on the outskirts of a large village. Ramona bit her lip, whishing she had picked out some other book at the bookstore. She ought to have known there was something suspicious about it, because she had felt its allure. The book had enticed her into buying it.

Theo clutched the brooch tightly in his hand. He was holding it so hard it poked through his skin, and blood began to drip between his fingers. He seemed to feel that he ought to be able to move them back into their own times again with his sheer will power. He didn't want to have a new adventure in time travel, he didn't want Pluto to be with him. It was so hard to feel responsible both for Pluto and Ramona, in that way it would have been easier to be alone. Now there were two others he had to be thinking about all the time and worrying about protecting. Ramona and Pluto were the two people in the world he loved the most, and he would rather have sacrificed his own life than put theirs in jeopardy.

Kiefer raised his head, to see what it was that had attracted his attention out of the corner of his eye. With a jolt of fear he saw the two strangers and their dog standing there staring at him. How had they gotten there? Where had they appeared from? He had been inattentive when he was on guard, and he would surely be punished for it. Keifer flew to attention, spear in one hand, thick cudgel in the other, prepared to defend himself, his Queen Boudica and his village. He opened his mouth to shout a warning to the villagers. 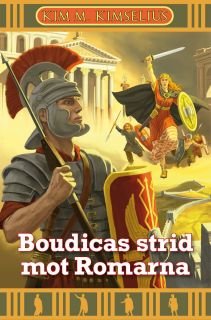