Snapphanar! – Guerilla of the 17th century

Book 7 in the Theo and Ramona series

Text on the back cover of Snapphanar! - Guerilla of the 17th century:

Ramona finds a document in an old chest – and this takes her on a swirling journey through time. She finds herself in the year 1676 with 'Snapphanarna', the Danish Gerilla who fought for freedom in the war between Sweden and Denmark. She looses her memory in an accident and does not remember who she is.

Theo manages to follow Ramona in her time travel, but accidently ends up on the side of the adversaries. Suddenly the two friends meet in a battle of life and death.

What the reviewers had to say about Snapphanar! – Guerilla of the 17th century:

“I only have one word for this book: PERFECT! Exiting from the first to the last page, the introduction, the story and the ending are all very well written. In other words GREAT!”

"Kimselius brings life to the story about the Swedish guerilla called Snapphanar in the forests of the Northern part of Scania, county in the South of Sweden. She writes very well about the ordinary farmers and how they become victims of a war - and she states in an objective way how history is written by the conquerors. The language is easy to read and the story is thrilling which makes the book an excellent choice for young boys, usually not interested in reading. The glossarry is extensive and explanatory for the young reader. The book may very well be used in school work."

"A book about Snapphanar that no one should miss!"

"The story is filled with exciting turns and the descriptions take a grip on the reader from page one!"

"Unbelievable. GREAT! It is so perfect! It RULES!"

"Are you a spy?" Peder bellowed.

He couldn't hold back his anger over being caught in the act by a brat. But how could a spy be hiding at Bendt Oredtzen's farm? If someone was hiding here he must be a snapphane, not a Swedish spy.

Ramona eagerly shook her head, turning pale by fear of the man's wrath.

"Let's shoot him!" Peder Pedersen declared and turned away from Ramona.

"Be quiet!!" Peder shouted, quickly spinning around, smacking Ramona right across her mouth.

It was painful and Ramona couldn't hold back a scream. She licked the blood from her lips, chapped by the blow.

"What a little goose!" Peder said and glared at Ramona. "He's nothing to keep, just take him to the farmyard and shoot him."

Bendt hesitated. He wasn't sure that the boy he was holding in a firm grip was a spy or not. Never before had anyone dared to sneak into his house. If the king's men came, they arrived openly in a big troop to seek through his farm after snapphanar. To send a single spy to his farm…

Slowly Bendt shook his head feeling certain that it was an innocent boy he was holding in his arms. Without thinking he loosened the firm grip of the boy's clothes.

When Ramona felt this she took her chance. She didn't want to get shot. She wanted to get back to her own time. She remembered having seen in a movie on TV how the person had gotten out of a similar grip. She went limp and sank below the man's arms, then she tightened her muscles and took a leap away from Bendt passing the other man who wanted to shoot her. She managed to slip away from the men and ran towards the door and freedom.

What if the door was looked? Then she wasn't able to get out. If so, was there another door somewhere in the house? Ramona's heart was pounding, not from the short run, but from fear of getting caught and then shot. She knew that there was no point in telling the truth about her being in the room. They would never believe her. She had tried that numerous times before when she had gotten into a mess when travelling in time and she had learned to play along and pretend.

Her hand reached the handle of the simple wooden door leading to freedom. Ramona pushed the handle down, threw the door open and took a leap. She was free! A tremendous relief filled her flying out through the door. But the joy didn't last long for Ramona heard a voice shouting at her.

The woman entering through the door was in a very bad temper after the row with her husband. And her temper hadn't improved when she had discovered that the fox had been inside the henhouse and tore her hens to pieces. She had walked hurriedly towards the door, when, to her surprise, she saw the door flung open and a strange young boy jump out. Instinctively she stretched out her leg to stop the boy, shouting:

Ramona didn't have time to avoid the outstretched leg so she tumbled. It all went so quickly that she didn't have time to reach out her arms to stop the fall and with a terrified scream she fell on the big, flat stone lying just outside the door. A thump was heard from Ramona's head when it hit the ground and then she lay still.

The woman bent down and examined the fallen boy. What a misfortune, now she had killed a young man, she thought, seeing the amount of blood that coloured the ground red around the boy's head.

There was the document, half hidden under the chest. If Robert hadn't known it was there he wouldn't have thought about it.

But now, understanding its importance, he eagerly bent down and took it. He wanted to get it before Theo got there. He put the torch on the chest. When Robert held the document he shut his eyes and prepared to travel in time. Nothing happened! He opened his eyes and looked at Theo.

"Give me the document!" Theo demanded, put down his backpack and reached out his hand. "Grab my shoulder and hold tight, in case something happens."

Theo took a firm grip around Pluto's collar, while he held the document in his other hand. He lifted the paper and started to read. Suddenly the well-known unpleasant feeling was there: his body was tingling, his hair felt as if it was standing straight up, the room became blurred and then… 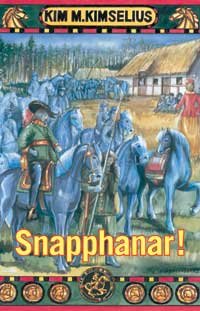