Book 6 in the Theo and Ramona series

Text on the back cover of The Black Death:

It's the year of the great plague, 1348, in Florence. The merciless disease wipes everything out in its way, leaving villages and cities deserted and empty. It's a devastating catastrophe hitting Europe.

Theo and Ramona are transported in time and find themselves in a plague infected town. There they meet Minette who carries a dark secret. When she finally reveals her secret to Theo and Ramona, it's so terrible they can hardly believe it's true. They realise they have to get out of there as fast as they can. When they finally escape they find themselves looking straight in the eye of the Black Death.

What the reviewers had to say about The Black Death:

“... takes a firm grip of the reader who can't help caring deeply about the people depicted in the book and what their fate might be. The Black Death is the best of the six books about Theo and Ramona."

“It is obvious that Kimselius has made a comprehensive research before writing this book and the story therefore feels unpleasantly true. The flowing language keeps the suspense high throughout the book. Like the earlier books by Kimselius this book will be a frequent loan from the libraries.”

”Kim Kimselius' readers are never disappointed – you cannot put the book down!”

"Realistic Fantasy - or fantastic reality? Bengt Eriksson, reporter of Kvallsposten, is fascinated by the time travels in Kim's books for young people of all ages."

Excerpt from The Black Death:

"Ramona, look!" Theo said and showed her his wrists.

Ramona looked at his dirty hands covered with blood and at first she didn't realise what Theo wanted to show her. Then she saw them… the small, read fleabites.

"Oh, no! Theo!" She burst out terrified, now sure of what they meant.

"I have had a terrible headache since I woke up on the stack of dead bodies inside the town. For a while I thought it might be due to the blow I got on my head. But… but obviously I got the infection," Theo said, his eyes widening, taking a quick breath when he realised what would be his fate.

In his mind he pictured all the corpses lying around him as he woke up, all with the bluish-black tongues and body-parts, the big, festering bubonic, the stench… He would end up in an unmarked grave together with hundreds of dead. He would…

Theo didn't want to finish his thoughts. He swallowed loudly.

"What is it?" Minette asked when she saw the dreadful look on Theo and Ramona's faces. She understood that there was something more to it than just the terrifying things happening in front of their eyes.

Theo showed her the fleabites.

"Oh, that's nothing, I have plenty of those!" Minette said pulling up the sleeves of her dress and showed them.

Both her arms were full from fleabites.

" Everyone has fleabites, you can't avoid it. I have had fleabites all my life. I'll bet you have them too," Minette said.

Ramona didn't dare to look. If she hadn't really seen any bites she could make believe that she hadn't been bitten, that she didn't have the infection, that she wouldn't die… Then she remembered that her back had been itchy during the night. It would have been so easy to lift up her t-shirt and ask Theo or Minette to see if there were any fleabites. But as long as she didn't know she could avoid the truth: she would be among the wretched people being burned alive or buried in a mass grave. But not before she had suffered the gruesome pain of the plague.

"What do we do now?" she said, without expressing her own suspicions.

"You better get away alone," Theo said. "Then we won't infect you!"

Of course he knew she would never leave him, but he didn't want her to die because of him.

"For once in your life you have to listen to me and do as I say," Theo said with an authoritative voice.

Surprised Ramona looked at him. He had never sounded so angry and firm to her before. She knew he would never give in to her if she persisted in wanting to stay. She had to find out the truth at once. She pulled her t-shirt up, turned her back towards Theo and said:

Not a sound was heard from Theo or Minette. Ramona puts her t-shirt back on again and turns to them.

Theo nodded and Minette looked at her, eyes full of pity. They didn't have to say anything. Ramona understood anyway. The itch during the night had been fleas feasting upon her. She had the infection in her blood too. Even she would die! 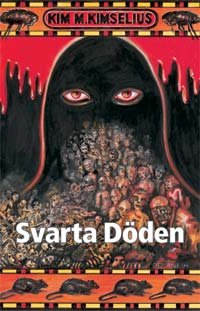